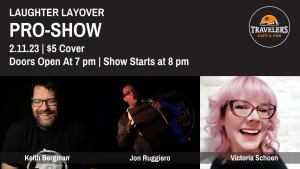 Keith Bergman has held many ridiculous jobs in his life, from record store manager to adult video reviewer to rock and roll drummer. When he got tired of carrying amps around, he added standup comedian to his resume, and he’s spent the last decade traveling the country, equally at home in dive bars and A-list comedy clubs. His sardonic observations and iconoclastic life experiences are fuel for a comedy show that’s equal parts youthful rebellion and middle-aged resignation, the story of the long, strange journey of the only dad at the PTA meeting in a death metal t-shirt. Keith’s albums, “Disheveled” and “The Goldfish,” remain popular on streaming services, and his third record, “Big Fat Dreamboat,” is slated for a 2023 release.

Jon Ruggiero is all about teaching people new things. The former janitor and nude model is a Toledo journalist, escape room actor, and contributor to the Hard Drive satirical news site. His sharp takes on everything from alien pyramids to the perfect Taco Bell order have won him fans in comedy clubs and indie rooms across the Midwest.

Victoria’s comedy has been described as being in English. She has been regularly recognized for at least trying